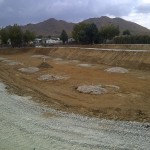 After corrective operational actions were put in place, a percolation pond that once overflowed now remains dry and in reserve capacity. At one point prior to the facility overhaul, both percolation ponds were at capacity and the facility owner had to pay to truck material 30 miles away to an off- site disposal area.

The park owners had received notices from the Lahontan Regional Water Quality Control Board to correct the various problems, or pay $2 million in capacity charges and infrastructure costs to connect to the City of Apple Valley’s public sewer system.

Compounding the problem, the two percolation ponds were filled to capacity at the onset of the rainy season.The owner needed to pay approximately $10,000 a week to truck effluent 30 miles away to a regional wastewater facility for disposal.

“Although this project involved a small facility, the same strategic approach can be used at larger facilities to focus on systematic opportunities to improve operational flexibility and reliability, free stranded capacity and defer, lower or eliminate unnecessary program costs,” Pastore said.

Developing a Corrective Action Plan with the RWQCB

The park owner and Dudek agreed the RWQCB staff needed to have confidence that plant deficiencies would be remedied to its satisfaction. To build trust with the regional board staff, Pastore became the single point of contact as the owner’s representative because of his 30 years’ experience in the wastewater industry, including serving as general manager of several districts. Pastore and the Dudek team presented to the regional board a corrective action plan that outlined the plant’s physical and operational deficiencies, recommended corrective solutions and provided a detailed schedule for completion.

“We submitted weekly operational reports that included documentation of pond levels, tabulation of sludge and effluent hauling volumes and a description of daily operational tasks,” Pastore said. “By keeping the RWQCB staff in the loop throughout the project, potentially serious incidents that arose were handled as email communications instead of as formal violations.”

Dudek’s operational assessment also showed that corrective action to allow continued treatment operations would be significantly less than the estimated $2 million to connect to the public sewer system.

The assessment of plant-wide deficiencies included a matrix for each process area and listing the issue/condition, its impact/metric, corrective action needed and any alternatives. A capital improvement plan submitted to the owner prioritized improvements and identified costs for essential equipment such as emergency generation, level controls and alarms, and site drainage improvements.

The assessment determined that the headworks and sludge pumping operations were the main source of odors. An odor control and monitoring plan was submitted and approved by the RWQCB. Additionally, out-of-service sludge holding tanks were retrofitted with new aeration equipment and valving and placed back in service. Operational flexibility and effluent quality were improved and odor potential reduced.

An analysis of the pond water and substrate indicated that lack of algae control had caused buildup of surface film in each pond and lead to unwanted anaerobic digestion of the sludge layer on the pond floor. This condition caused the sludge to calcify to a depth of 6-8 inches. With limited percolation, the ponds were at maximum capacity and wind waves severely eroding the banks caused concern about possible structural failure.

The pond banks were addressed first with a low-cost fix using plastic sheeting and sand bags.

Solving the lack of percolation proved more difficult. Dudek engineers developed a short term plan so the owner could temporarily discontinue trucking the effluent. Solar-powered floating mixer units were installed in each pond to distribute BIOWISH, a commercial enzyme product used to decrease the algae and improve pond pH, thereby softening the pond bottom. A floating TORNADO aerator was temporarily installed in the smaller pond and later relocated to the larger pond to breakup the sludge layer to increase percolation. An effluent evaporative spray system was installed in each pond.

For a sustainable solution, Dudek recommended dredging the bottom of each pond. Each pond was dredged separately with as much dredged material used as possible to reconstruct the pond banks. Working closely with the plant operator, operational considerations such as interconnecting drain lines, strategically locating valving and improving access points were incorporated into the pond redesign to allow for improved operating flexibility.

Today, the small percolation pond handles the entire plant flow, while the large pond remains dry and in a reserve capacity.