Host plant establishment may allow butterfly population numbers to increase to levels that could withstand further population loss due to future drought and climate change. To help these unique blue butterflies recover from dangerously low population numbers, Erin Bergman, a Dudek biologist and arborist, has led a group of volunteers on a year-long project on the Peninsula to re-establish blue butterfly perennial host plants, which are less susceptible than annuals to drought. 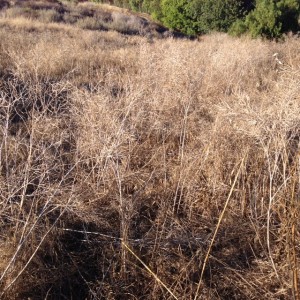 Bergman said that weeding is the first step to host plant establishment. Recently germinated weeds are scraped, reducing their growth and helping native species replace the weeds within the seedbank. Weather forecasts are monitored for rain, and if over a 50% chance is expected, recently weeded areas are seeded with native species, focusing on host plants for the threatened species. Once a plot has been cleared, host plants from the Palos Verdes Peninsula Land Conservancy (Conservancy) nursery are planted throughout the plot.

At this point, proper irrigation is critical to ensure the success of the transplanted plants. Grey water is directly applied to the native seedlings through a gravity irrigation system every two weeks. This drought-friendly method only uses approximately one cup of water per plant.

Bergman and her team have gradually increased the size and density of plots, and the container plants have grown to almost a foot tall with more than a foot-long fibrous root system. “It is amazing how land can recover native species if you just get rid of the weeds.” Bergman said of their efforts. Early signs of success are already visible, with native dove weed filling in areas where non-native species once occurred. 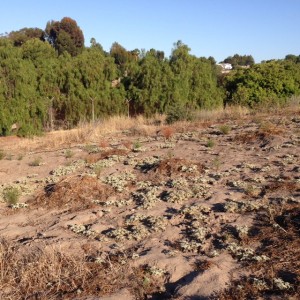 Several groups from the local community are helping with varying aspects of the restoration and propagation process. Efforts include:

The volunteer efforts have so far been successful in re-establishing host plants for both blue butterfly species. With continued propagation and planting of native host species, as well as a comprehensive habitat restoration effort, butterfly population recovery on the Peninsula is possible. 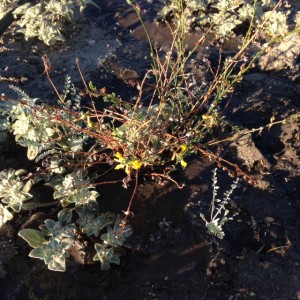 Erin Bergman is a biologist and certified arborist with over 11 years’ experience in biological research and ecology, specializing in botany, weed mapping/monitoring, rangeland science, agricultural studies, and rare species. For more information, contact her at ebergman@dudek.com.