While installing the conveyance pipeline for the Poseidon Carlsbad desalination plant, crews lowered a crane for maintenance and were surprised to find a nest containing five bird eggs. The contractor, Kiewit Shea Desalination (KSD), immediately halted work. Dudek biologists—serving as environmental monitors for the project—identified the nest as belonging to Cassin’s Kingbird, a native species protected under the Migratory Bird Treaty Act.

Dudek Principal Anita Hayworth was surprised by the discovery, because “pipeline construction was taking place in a highly developed area and was in active use all day long.” The lowered crane arm was returned to its original position to protect the nest and eggs.

Empty nests can be removed, but interfering with a migratory species’ active nest is a felony, and punishable by fines. The U.S. Fish and Wildlife Service (USFWS) has the authority to stop work in order to protect species, so this discovery had the potential to delay construction of the project, which is slated to supply 50 million gallons of potable water daily to drought-stricken San Diego County by late 2015.

The morning after discovering the nest, a biologist monitoring the site confirmed adult birds flying in to care for the nest—the nest was active. KSD, Dudek biologists, and USFWS representatives agreed normal work could continue as long as the nest was not disturbed, with the goal being to wait for the eggs to hatch before moving the nest.

“Once the adults started bringing in food, we had a time-stamp for when the eggs hatched,” Hayworth said. The chicks would leave in two weeks, but the crane had to be lowered for maintenance in two days to keep the project on schedule. Dudek immediately filed an application with the USFWS to permit removal of the chicks and nest to a rescue facility. The USFWS approved the permit the next day. 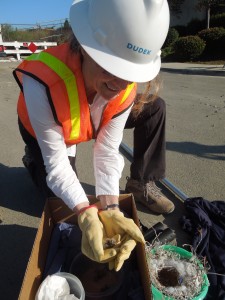 As the permit holder, Hayworth was the only person allowed to handle the nest and birds. She climbed a ladder next to the crane while a second Dudek biologist stood below with a net. As the crane arm lowered and the nest tilted, Hayworth scooped up three chicks and the nest. One chick fell and was caught by the net. The fifth egg had failed to hatch.

Several factors contributed to the successful expedited permit process, Hayworth said. “KSD did everything they could to protect the nest, and documented the process with thorough biological observations,” she said. This preparedness and transparency elicited a quick response from the USFWS, allowing an important regional water project to continue construction without sacrificing the safety of a protected species.