Ten million acres of public land in California deserts are under a new management blueprint with the U.S. Department of the Interior’s approval of the Record of Decision for the Desert Renewable Energy Conservation Plan (DRECP) in September.

“For public lands, the signing of the Record of Decision is an important milestone and marks the start of implementation,” said Dudek’s Mike Howard, who has served as lead conservation biologist for DRECP for the past 7 years. “Renewable energy projects on public lands will be easier to develop because the plan provides greater certainty for developers working on BLM lands.”

The plan incentivizes and streamlines renewable energy development in mapped development areas on BLM lands and provides regulatory coverage for federally endangered and threatened species, such as the California condor and desert tortoise.

Understanding the New CMAs is Key 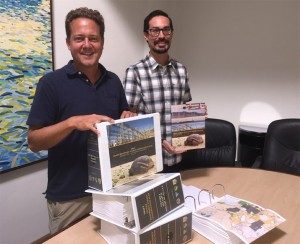 Howard said the plan also protects millions of acres of the California desert and establishes on those lands a new set of resource management rules, referred to as Conservation and Management Actions (CMAs), which are a central element of the BLM DRECP Land Use Plan Amendment.

“CMAs provide clarity on how vast expanses of desert lands will be managed going forward, including management for biological and cultural resources, outdoor recreation, and mineral extraction,” said Howard, who helped author the CMAs. “As implementation begins, in-depth knowledge about the CMAs will greatly help private and public entities navigate the new plan.”

Howard said Phase II focuses on privately held land in regions such as the Imperial Valley and the West Mojave that have significant renewable energy potential.

“Privately owned lands are not addressed by the BLM documents that were just approved,” he said. “DRECP Phase II strives to integrate state energy planning into local land use planning structures, like general plans, to effectively streamline renewable energy development in concert with resource conservation.”

Recent passage and signing by the Governor of AB 2087, focused on Regional Conservation Investment Strategies (RCIS), adds another tool for Phase II implementation.

The Draft DRECP published in September 2014 stretched to more than 12,000 pages. The public input received on the document was unprecedented, yielding more than 14,000 comment letters from federal, state, and local agencies; Native American tribes; community groups and nonprofit organizations; and individuals.

To manage the response effort to so many comments, Dudek’s publications group developed a secure project website with a categorized database for every comment received. The site was accessible to agency and consultant staff, allowing for a collaborative effort that kept the project on schedule. The site’s other useful tools included an index of all comment letters received, the comment letters themselves for easy reference, and template files for the writing team, which greatly streamlined what otherwise could have been a daunting process.

The latest DRECP publications—the BLM Record of Decision and Land Use Plan Amendment—totaled more than 2,400 pages.

“One key to completing a project of this size is to determine exactly what the client needs in terms of document organization and presentation,” said Steve Taffolla, who has served as the project’s lead technical editor and publications coordinator for more than 4 years. “It is also important to consider distribution requirements when publishing a document of this size, especially since most members of the public will access the files digitally.

Previous DRECP documents required publishing hundreds of files, many of which were large and complex, on agency websites. Dudek worked closely with agency staff to ensure that files were as user-friendly as possible by adhering to strict file-size requirements and federal accessibility standards.”

For more information about DRECP, contact Mike Howard at mhoward@dudek.com, or for technical documentation projects, contact Steve Taffolla at staffolla@dudek.com.