The U.S. Fish and Wildlife Service (USFWS) issued updated survey protocol guidelines for listed fairy shrimp in California and southern Oregon on June 25. The guidelines divide California into Zones A, B and C (see map below) for surveying protocol purposes. 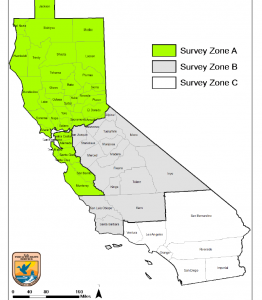 “There is a lot of nuance now so the protocol needs to be carefully read before conducting surveys,” Ortega said. “Project owners should talk with permitted biologists who have experience in the specific zone where their project is located.”