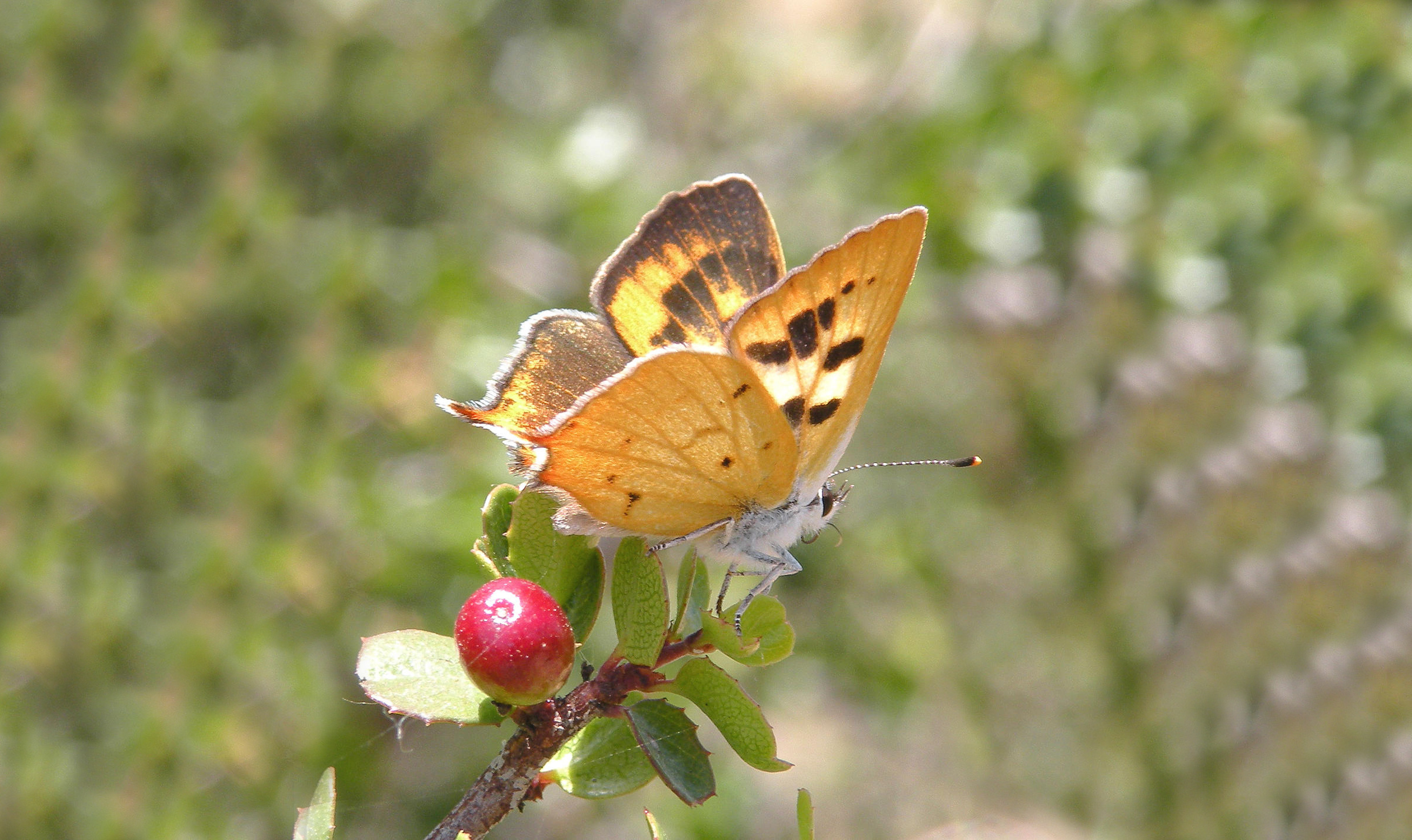 On December 21, 2021, the U.S. Fish and Wildlife Service (USFWS) officially published the final listing rule for the Hermes copper butterfly (Lycaena [Hermelycaena] hermes), designating it as a threatened species under the Endangered Species Act (ESA). As the species is endemic to San Diego County and northern Baja California, Mexico, the final rule designates 35,027 acres of Critical Habitat in San Diego County. This is nearly the same acreage proposed in January 2020. The final rule also identifies conservation measures and exceptions to the ESA for certain permissible activities.

Where does the Hermes copper butterfly occur?

Hermes copper butterfly (Hermes) adults are active May through July, which is when females deposit single eggs exclusively on their host plant, Rhamnus crocea shrubs (spiny redberry), in coastal sage scrub and chaparral vegetation. Hermes eggs remain in a period of suspended development (diapause) during the late summer, fall, and winter, typically on the host plant. The butterfly’s primary nectar source is the shrub Eriogonum fasciculatum (California buckwheat), although other nectar sources can provide equivalent or supplemental adult nutrition. Hermes copper butterflies do not stray far from their host plant and nectar sources, though they have been recaptured up to 0.7 miles from the point of release. Given their singular host plant, the need for nectar sources near that plant, and their tendency not to disperse, suitable habitat for the Hermes copper butterfly is finite.

The USFWS now considers there to be 98 (95 in the U.S.) known historical or existing Hermes copper butterfly occurrences in the U.S. and northwestern Baja California, Mexico. Twenty-six occurrences are determined or presumed to be present still, 56 are presumed to no longer be present, and 16 are permanently gone. Habitat/species destruction is due to five threats, outlined by the USFWS, including:

What has USFWS defined as Hermes copper butterfly critical habitat?

Critical habitat includes land within or near the geographical area occupied by the species (at the time of listing), where key life requirements are met, and where additional management or protections are required. The USFWS’ critical habitat unit boundaries for the Hermes copper butterfly, include:

Consultation regarding impacts to critical habitat must occur when there is a federal action such as authorization of funding (e.g., impacts to U.S. Army Corps of Engineers regulated areas; Federal Highway Administration projects) or occurrence on federal lands.

Are any activities exempt from permit requirements?

4(d) rules outline how and where the prohibitions of Section 9(a)(1) of the ESA will be applied. The USFWS’ proposed rules for listing Hermes include 4(d) rule provisions/exclusions, detailing certain activities that are allowed to occur without a permit. Potential taking of the species may occur within the exemption zones when certain activities are underway, such as:

Other activities may be deemed to cause little risk to Hermes, but coordination with the USFWS is required before implementation. These might include:

However, permits would be required for any unauthorized handling and modification, removal, or destruction of spiny redberry within the species’ range that is known to be occupied by Hermes copper butterfly and that may result in death or injury of adults, eggs, larvae, or pupae.

This final rule affects most of the natural lands east of the developed areas in San Diego County. Dudek’s experts expect the USFWS to develop official species survey protocols that may be similar or different from the current ones currently recommended by the County of San Diego and a process for permitting biologists to perform focused surveys for Hermes copper butterfly. Our staff are in close communication with the USFWS regarding this. Any impacts to Hermes’ host plant and/or nectar plants may trigger the need for coordination or consultation with the USFWS, particularly if those areas are within 1 kilometer of known occupied areas.

If you think your current or future project may be affected by the listing of the Hermes copper butterfly as Threatened, please contact Brock Ortega. Our permitted biologists and butterfly experts can perform surveys and are adept at USFWS regulatory compliance and permitting if needed

The Remarkable Restoration of the Bay Checkerspot Butterfly in Edgewood Preserve