Many cities whose sewer systems were constructed in the first half of the 20th century are plagued by sanitary sewer overflows (SSOs) due to long-neglected root intrusion and pipe defects. To combat this, sewers can be rehabilitated using trenchless cured-in-place pipe (CIPP) lining. This method can fully rehabilitate aging pipes at least three times faster and for one-quarter to one-third the cost of conventional open trench replacement, and with far less public and environmental impact. 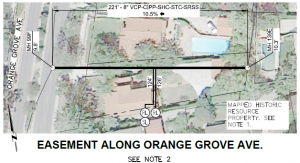 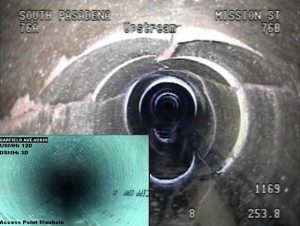 Root intrusion and broken pipes contributed to sewer overflows in the City. Inset: Post-CIPP lined sewer with a smooth inner surface and no joints.

The CIPP technique constructs a new pipe within an existing pipe using the existing pipe as a mold. The new liner is inverted into the pipe between manholes and cured using steam or hot water. The resulting pipe is as strong as the original host pipe and has an expected useful life in excess of 50 years.

“CIPP is by no means a cutting-edge technology, and the liner material and installation are fairly well-covered in the public works construction guidelines, but when such a high-volume CIPP project is undertaken, plenty can go wrong,” Project Manager Amanda Combs said. Supported by the City’s system-wide GIS and sewer inspection data, Dudek implemented thorough planning to avoid overlooking design aspects that could result in costly construction change orders due to unanticipated conditions.

Phase 1 construction of the City’s sewer rehabilitation and repair program was completed in September 2015, ahead of schedule and with no change orders. “Dudek’s design laid the foundation for the project’s success. The City could not be more pleased with the successful outcome of this project” said Shin Furukawa, Deputy Public Works Director for the City of South Pasadena.

In February 2016, the City and Dudek were honored with the Los Angeles Basin Section of the Clean Water Environment Association’s 2015 Engineering Achievement Award for the project.